Explore 25 miles of waterway on the Philpott Lake Blueway

Announced the same year as Philpott Lake’s 65th anniversary, the Philpott Lake Blueway Water Trail became official on Saturday, May 6, but it connects water trails that local boaters have been running for years. The blueway contains seven mapped trails that total more than 25 miles, and which can be accessed by canoes, kayaks, paddleboards, and motorized watercraft.

The individual water trails range from 1.5 miles to 9 miles in length. They can be run quickly, or lingered over for days. The trails reach up waterways into the three counties, but they are connected by Philpott Lake, a 3,000-acre lake surrounded by 100 miles of pristine shoreline and 7,000 acres of mostly unspoiled wilderness. The lake is a recreational jewel, used by families for camping, swimming, boating, fishing, paddleboarding, and more.

Here is a look at some of the features on the Philpott Lake Blueway Water Trail:

In 1944, Congress authorized construction of Philpott Dam to tame the Smith River and control flooding. That authorization also included providing hydropower and recreation, as well as the responsibility for environmental stewardship of the 3,000-acre lake formed by the dam, 100 miles of pristine shoreline, and the 7,000 acres of forested land surrounding the lake.

At the upper end of Bowens Creek Branch, this beautiful waterfall is only accessible by paddle craft. Too shallow for most motorboats and only a short 30-minute paddle from Bowens Creek Park, this is an opportunity to see something that most visitors to Philpott Lake miss. And, in the hot summer, it’s a great little resting spot that is several degrees cooler than out on the main lake.

Scenic and secluded, Deer Island is the largest of several islands and boasts an island campground. It is only accessible by boat. You can register for camping on Deer Island at Salthouse Branch Park.

Visit these scenic falls that were created by the damming of Goblintown Creek in the 1930s where Fairystone Lake spills into Philpott. Beneath Fairystone Lake lies the remains of the historic mining town of Fayerdale. Fairystone Park and Lake are named after the cross-shaped crystals of staurolite found in the surrounding hillsides. Local legends say these stones were created by tears from angels.

The park was named for the historic mill site, now underwater, built by Thomas Fleming Jamison in the late 1880s. The mill was in operation until 1949 when the area was evacuated to make way for the lake. Jamison Point is accessible by boat from the access ramp and is a beautiful spot for picnicking and taking in scenic views of the lake.

These “bluish tinged” rock cliffs are the site of historic Blue Falls on the Smith River, now under the lake. In the 1800s, the falls were the upper limit of Batteau navigation on the Smith River from Ryans Branch. The cliffs, are just a short paddle around the point and under the Union Bridge.

Calico Rock is a 200-foot cliff that towers along the shoreline not far from Runnet Bag. The coloration of the rocks give this site its name and are best viewed from the water.

Where the Smith River is just below the surface, the waters of Emberson Falls tumble down lichen covered rocks and flow into a small cove surrounded by thick patches of Rhododendron. Accessed only by water, plan for a full day of paddling out and back from Ryans Branch or Runnet Bag. Not recommended for motorized boats due to shallow water and rocks. An additional 1.5 miles upstream is White Falls.

The Smith River gives life to Philpott Lake. It begins its journey as small springs on the eastern slopes of the Blue Ridge Mountains and winds its way through pristine forest and historic farmlands. The river cascades over Black Falls and White Falls, then slows to form Philpott Lake. After dropping through the turbines in the Philpott Dam Powerhouse, the Smith River once again flows wild and free, a major trout fishery for another 45 miles to join the Dan River near Eden, N.C. 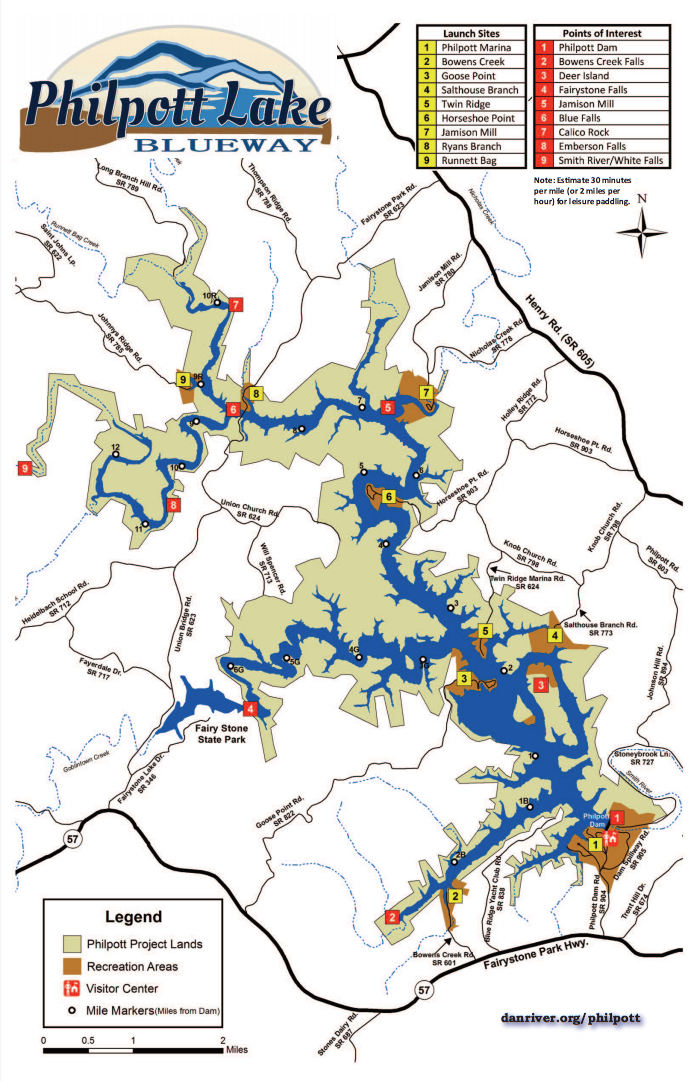